Growth hormone (GH) is essential for normal bone growth during childhood and adolescence.

High levels of GH also lead to an increase in muscle mass and performance, and keep body fat low. However, the levels of GH decline from mid-puberty, when the body stops growing.

While higher levels of GH later in life do not promote bone growth, they can still make it easier to build muscle, or stop muscle decline during ageing.

Despite this, medical use of GH is controversial due to safety concerns, and is restricted to children deficient in growth, severe muscle wasting in AIDS (AIDS wasting syndrome), and severe thyroid dysfunction[1].

However, adverse effects seen with GH use may stem from flooding the body with high amounts of external GH, the distribution and use of which can not be controlled by the body’s regulatory systems. Therefore, GH secretagogues have gained interest in the medical world, as these activate the body’s own GH production, avoiding excess amounts of GH to build up.

MK-677 is a potent GH secretagogue, which increases GH and IGF-1 levels, and which mimics the use of GH by promoting an increase in muscle mass – without the negative side effects observed with GH use.

MK-677 may therefore emerge as a valuable tool to treat growth deficiency and to promote muscle mass increase. 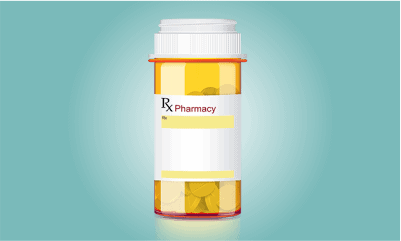 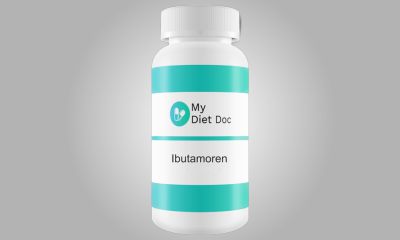 MK-677 or Ibutamoren (also known as L-163 or nutrabol) is a growth hormone (GH) secretagogue, which means that it promotes secretion of GH.

In order to fully understand what MK-677 is, we need to step back a bit and look at the bigger picture of GH, its physiological functions and its interacting partners, and talk about some interesting facts around the GH system.

GH is produced by the pituitary gland, a pea-sized part of the brain, which produces most of the hormones that are secreted into the body. GH is the most abundant hormone here, as it makes up about 10% of the weight of the pituitary gland.

As the name indicates, the main function of GH is to promote linear growth in children, by acting directly on the long bones. GH is secreted in approximately 10 pulses of 90 minutes each throughout the day, with 2 hour  breaks in between.

GH secretion is regulated by three factors from the hypothalamus, located next to the pituitary gland in the brain.

All three factors respond to external stimuli such as stress, sleep, food intake, body composition, and exercise, and together produce the pulsating pattern of GH release.

Ghrelin is also produced in large quantities by the stomach and circulated through the body[1],[2].

While ghrelin best known as a key regulator of appetite and obesity, it is also important for the energy household of the body, supports the functioning of the heart, and is able to increase muscle mass[3].

MK-677 is a non-peptide Ghrelin mimetic, which means that it functions like ghrelin, binds to the same receptors, and triggers the same pathways.

Mimetics are often used as they are easier to produce than the original compound, or they have slightly different properties, making them preferable or easier to use.

MK-677 is orally stable and can be taken as a pill or solution, making the route of administration much easier than injectable drugs.

MK-677 binds to the ghrelin receptors that are present throughout the body. This stimulates the production and release of GH.

Evidence of MK-677 activity on the GH system comes from the observation that after MK-677 intake, the levels of insulin-like growth factor 1 (IGF-1) increase. IGF-1 is activated by GH through binding to its receptors in the liver, and acts as a downstream effector at the periphery of the body.

This means that GH can be considered the main switch of the whole system, which is released from the brain. GH then passes the baton to more local molecules such as IGF-1, which travels through the bloodstream to remote areas of the body.

IGF-1 is more stable and has a longer half-life than GH, making it a very effective molecule.

IGF-1 binds to receptors on the cell surface and activates pathways within those cells, such as those responsible for cell division and growth. Therefore, MK-677 is able to activate the endogenous GH cascade just like its biological counterpart, ghrelin.

What is important here is that in contrast to direct application of GH, MK-677 triggers production of the body’s own GH, under the regulation of specific GH watchdogs, including for instance IGF-1, which prevents overproduction of GH.

This way, the body is not flooded with uncontrollable amounts of GH, making MK-677 a much safer alternative for medical use.

Confirmation of the extremely similar physiologic function of MK-677, compared to ghrelin, comes from the fact that MK-677 triggers GH release in the same pulsating pattern that occurs naturally[1],[2].

In contrast to the use of GH, the evidence for the use of MK-677 in growth deficient children is limited.

One study including 18 children with a chronological age of around 10 years and a bone age of 7 years tested the effect of MK-677. After 7 to 8 days of using MK-677, the children had increased levels of GH and IGF-1, however, the study was not followed up to assess the effect of MK-677 on growth directly[4].

Based on the higher levels of growth hormone it is however reasonable to assume that MK-677 does promote growth in GH deficient children. It is also interesting to note from this study that short-term use of only 7 days of MK-677 is sufficient to raise GH levels.

After the completion of the juvenile growth phase, the levels of GH and IGF-1 gradually start to decline.

Scientists think that the loss of GH and IGF-1 contributes to the loss of muscle mass during ageing (sarcopenia), as well as to frailty, cognitive decline, and potentially to the development of cardiovascular disease and atherosclerosis[5].

If the decline in GH is one of the major contributors to the burden of ageing, increasing GH levels appears as an obvious countermeasure to ease that burden and to maybe even slow down the ageing process.

This hypothesis has been tested in a large clinical study using MK-677, the safe alternative to using GH directly.

In the study, 65 healthy elderly people received daily doses of MK-677, or a placebo. The use of MK-677 increased the levels of GH and IGF-1 to those of healthy young adults without serious side effects, underlining the safety of MK-677.

Also, MK-677 increased the fat-free mass and body weight. However, at the end of the one-year study, the increase in fat-free mass did not result in increased strength or power[2].

These findings are encouraging as they show that MK-677 can reverse the drop in GH levels during ageing, but further studies are needed to investigate how this can be converted into a tool to slow down the ageing process.

As GH is primarily known for its role in bone growth in children, scientists investigated whether it was effective in promoting bone healing after fractures and surgery.

Hip surgery in elderly people can be associated with a functional decline, frailty, and morbidity.

Use of MK-677 in people recovering from hip fracture showed that it reduced the number of falls and improved some functional measures, compared to the placebo group.

This indicates a faster healing and recovery of function rate.

However, people in the group receiving MK-677 were also more likely to develop heart failure in one of the studies, which caused the termination of this study due to safety concerns[6][7].

Sleep patterns and sleep quantity are affected by many external factors such as exercise, stress, and anxiety. Many of these factors are converted into signals to our bodies by hormones.

The fact that the GH system was also involved in sleep regulation – as well as possibly in the loss of quality sleep during ageing – was investigated in the 90’s.

A study showed that using MK-677 improved sleep quality in young as well as in older men. In both groups, the amount of REM sleep phases increased, and variation between day-to-day sleep patterns decreased, compared to a placebo group[8].

This means that MK-677 could provide a more stable pattern of quality sleep, and reverse age-associated insomnia.

The use of GH has appealed to bodybuilders for a long time, as it promotes increase in fat-free mass, exercise performance, maximum oxygen uptake, and muscle strength.

However, use of GH is not FDA approved due to safety concerns derived from some studies that showed an increase in mortality and an increased risk of cancer. These effects are most likely not from the use of GH as such, but from the lack of regulation of excessive amounts of GH in the body, if GH is applied directly.

These concerns could possibly be circumvented by using MK-677 or other GH secretagogues, which upregulate the GH production internally.

This way, GH and IGF-1 are still being regulated by the body’s own systems.

Importantly, use of MK-677 does not increase testosterone levels.

Studies using MK-677 in elderly showed that approximately 50% of the fat-free mass gained was in the limbs[2].

A study in adult obese men showed an average gain of 3kg fat-free mass within 2 months without changes in fat mass[9].

Taken together, use of MK-677 may lead to an increase in fat-free mass and muscle performance.

However, it should be noted that MK-677 is not FDA approved for use in performance increase.

Dosages used in those studies that observed an increase in fat-free mass were 25mg of MK-677 per day, which resulted in a steady increase in serum IGF-1 levels as long as it was taken129.

The side effect and adverse event profiles of MK-677 have been favorable in most studies using the compound.

Serious adverse events were however noted in one study in people recovering from hip fracture, where a higher rate of heart failure was observed[6].

In other studies, the most notable side effect was a transient increase in appetite, which subsided after 3 months, muscle pain, joint pain, and edema.

Overall, MK-677 was well tolerated by most subjects, and did not show any long-term side effects within the first 2 years[2].

MK-677 is a relatively safe and well-tolerated GH secretagogue that activates endogenous GH production, increasing serum levels of IGF-1 to those seen in juveniles.

This promotes an increase in fat free mass, and may have other health benefits, such as higher quality sleep and protection against age-mediated decline in muscle mass.

Nina Bausek, PhD, MSc, is a geneticist with a research background in reproductive biology, oncology and hematology, who is currently working as a medical adviser, writer, and entrepreneur. Her mission is to improve health and fitness by spreading knowledge and supporting evidence-based methods. She currently lives in Vienna, Austria.